The now customary singing of carols, quaffing mulled cider and munching on mince pies in aid of the Yorkshire Air Ambulance will take place on the village green from 6.30pm on Saturday 22 December.

Please note the event for your diaries and pass the time and date around your friends. This is an important charity for us here in the dale and the Air Ambulance needs our best support.

On Saturday afternoon, 1 June, a female cyclist came off at speed going down the very steep hill of Heygate Bank. The police, a road ambulance crew and the Yorkshire Air Ambulance were called in.

The police and ambulance crew at the scene

The casualty was moved by the ambulance to the helicopter waiting in the field below Foster’s farm. 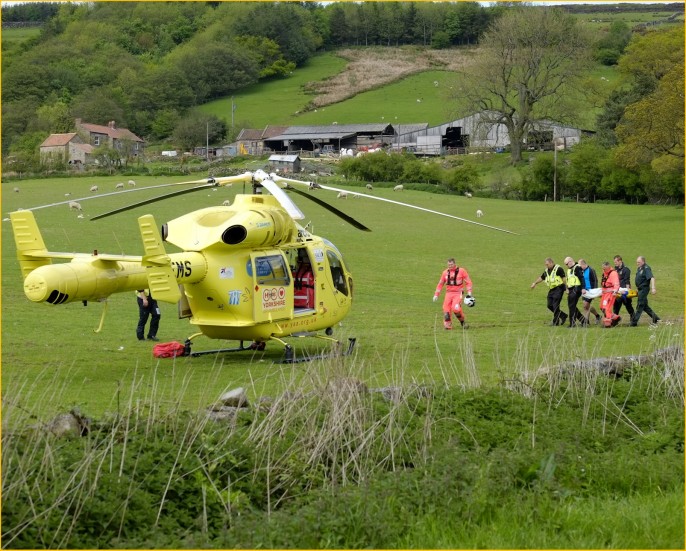 About to load the casualty

The police are investigating the cause of the accident, but the disgraceful state of the roads in Rosedale may have been a contributing factor, according to a source at the scene of the incident.

Donations to help the vital work of the Yorkshire Air Ambulance can be made at http://www.yorkshireairambulance.org.uk/donate/

Santa visited Rosedale tonight, on his sleigh to hand out sweets to the children and fill the air with Christmas music. It had a fantastic positive pied piper effect bringing village children out of their homes. Santa’s visit was part of an 11 night tour organisted by the Ryedale Lions which raises a considerable sum each year.  All money raised goes to Yorkshire Air Ambulance, Ryedale Special Families and Lions Local Charities.

and of course the new Rosedale Christmas Tree shone brightly in the background. Thanks Fellas !