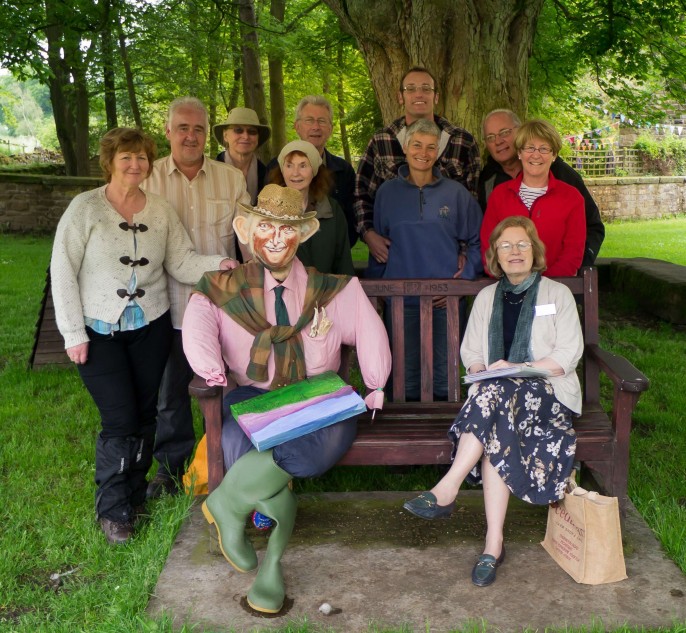 Linda Chambers about to set off on the village history walk with her co-guide, the Prince of Wales!

A Rosedale History Walk took place on Sunday with a leisurely stroll around Rosedale Abbey until the black cloud burst overhead and we all ran for cover! Local residents and visitors were treated to a mix of stories, facts and archive photos, which was very well received.
Our next walk will be to Thorgill and Sheriff’s Pit on Sunday 15 July, starting at the White Horse Farm Inn car park, Chimney Bank at 1pm and finishing back at the pub at around 4.30pm. The distance is around 5 miles and weatherproof clothing and strong walking boots are strongly recommended – details on http://rosedale.ryedaleconnect.org.uk or click on the Rosedale History Society link in the history section of the rosedale abbey website, or tel. 417071.

Paul Hudson, the weatherman on Look North was right and the rain stayed off for the Rosedale History Society walk around East Mines today, Wednesday 9 May. Five guests (midweek and a bad weather forecast) were shown the sites of the East Mines and had the local geology, industrial history and social history explained to them.

The next walk will be on Sunday 10 June, starting on the village green at 2.00pm and will cover the history of the village. The next one after that will be on Sunday 15 July starting from the White Horse Farm Inn at 1.00pm and will go via Medd’s Farm to Sherrif’s Pit, then to Bank Top and back down Chimney Bank, in all about 5 miles and will last 3.5 to 4 hours. For further details contact the Secretary of the Rosedale History Society on 01751 417071 or rosedalehistory@hotmail.co.uk

THIS month is the second part of the Yorkshire’s Two Horseshoes country walk, leaving Farndale for the more industrious Rosedale.

The village of Rosedale Abbey inherits its name from the priory which was founded in the 12th century and supported nine nuns and a prioress.

There were a few lay workers, mainly farmers and shepherds, and the priory had about 12 sacks of wool for sale annually from its flock of sheep. The priory survived until Henry VIII called for a suppression of the monasteries and the priory at Rosedale was destroyed in the 16th century.

It is hard to believe this small corner of North Yorkshire, on the edge of the bleak North York Moors, could have played such an important part in our industrial heritage. Although the Romans brought improved farming methods to the area and the French set up a glasshouse making goblets, tumblers, flasks, etc in 1567, it was the demand for iron from industrial Teesside in the early 1800s that started a revolution in the dale. Not the small-scale operation that the Romans or Iron Age people developed, but a large and vigorous industry fuelled by the insatiable demand for iron for the developing world.

For the full article and walk link here

Grading – Steep hill at the start of the day then easy walking.

Parking – your transport awaits you in Rosedale Abbey.

from the Gazette & Herald 1st Feb 2012 BY Brian Beadle