Archive for the ‘Meetings’ Category

Members of the Cornwall Austin 7 Club visited Rosedale Abbey on Thursday 20 June. The seven cars ranged in age from 1927 to 1937! (photos by Jon Zigmond)

We would just like to spread the word that WI is still ongoing and it isn’t all Jam & Jerusalem.
This year we plan to:
Go out for afternoon tea & then the pantomime
Have a presentation from the Body Shop & Sue Ryder Charity
Talks about flower arranging & fascinators  & glass making & its history in Rosedale.
A talk about Bioresonance medicine.
We have talks on wildlife & conservation
We get together in the summer and go strawberry picking and have tea out.

We like to have nights when we get involved in making things – last year we  created our own hanging baskets
We’ve been to craft fairs , cookery demonstrations, made cards, etc had demonstrations on how to present items for the Rosedale Show
We also get invited to and invite back other WI’s for various events & quizzes
We  go on walks arranged by us & other WI’s and have even been belly dancing !
The members have their say in what we do through the year and make suggestions for the competition we hold each month.

The last 2012 tea and chat session for the Rosedale History Society was held in the Updale Reading Room on 2 December. The three ladies who help with providing the outstanding tea and cakes, Carol Cockerill, Margaret Truran and Monica Wilson, were each presented with Christmas garlands by the Secretary, Linda Chambers, in appreciation of all their support and hard work in aid of the RHS throughout the year.

Carol, Margaret and Monica receive their garlands. with John Dent looking on.

A note for the diaries: the first Tea and Chat in 2013 will be on Sunday 6 January between 2 and 4 pm. The research will be as stimulating and the refreshments as delicious as ever!

Walkers are Welcome in Rosedale !

One of North Yorkshire’s most historic and beautiful villages, Rosedale Abbey, is celebrating after becoming the first village in the North York Moors National Park to gain Walkers are Welcome status.

It’s the latest of over 80 towns and villages nationwide to join the innovative community-led scheme, which aims to highlight areas which have demonstrated real commitment to making visits from walkers as enjoyable as possible.

Rosedale Abbey, located roughly midway between Pickering and Castleton, is famous for its spectacular views and wild walks.

To gain the status, village representatives had to undertake a challenging application process to prove their commitment, including measures taken to maintain existing walks in good condition, and facilities available to visitors.

The village is aiming to promote the scheme with a special stand at the annual Rosedale Show in August, which regularly attracts over 6,000 visitors, and a walking festival later in the year.

Catriona McLees, the North York Moors National Park Authority’s Head of Promotion and Tourism, said: “Visitor surveys show that walking is by far the most popular activity in the North York Moors, be it a short stroll or a longer hike up hill and down dale. Rosedale has plenty to offer all abilities and I’m sure this award will encourage many more to discover the wonderful walks that start from the village.”

Pic below by Paddy Chambers of the Steering Committee being presented the Certificate by Nigel Botting, Secretary of Walkers are Welcome.

Park plans to save industrial heritage of Yorkshire’s Moors

A project is being launched in one of Yorkshire’s national parks to conserve its industrial heritage following a railway revolution that coincided with a boom in mining for iron ore.

Senior officials at the North York Moors National Park Authority have unveiled plans for the scheme to preserve a series of former mines which provide an insight into the area’s ironstone industry dating from the 19th century.

The initiative will also outline the growth of the railways which coincided with the arrival of the ironstone mining in the 1830s.

The project has an added resonance as the national park faces up to the biggest challenges in its 60-year history from a wave of new developments aimed at exploiting gas and mineral reserves.

It is hoped the move to highlight the industrial heritage from more than 170 years ago will help widen the public’s understanding of its importance while also conserving former mining sites.

The national park authority’s director of projects, Julie Lawrence, said: “The North York Moors has a long imprint of human activity that has shaped the landscape over the years including alum, jet and coal mining.

“However, the speed and scale of the exploitation of ironstone in the 19th century must surely have been one of the most dramatic transformations as relatively remote farming communities were turned into bustling sites of industry almost overnight.

“Signs of this industrial heritage are still scattered through the national park but work is needed to ensure that they are appreciated and will remain here for future generations.”

The mining industry helped fuel the industrial revolution in the north of England after the first ironstone was discovered in 1836 at Grosmont. The operations spread throughout the Esk Valley, Rosedale, Grosmont, Goathland, Ingleby Greenhow and Kildale areas, and the landscapes were changed dramatically by the extraction, processing and transportation of the ironstone.

The growth of the industry coincided with the arrival of the horse-drawn Whitby to Pickering railway. The line was designed by George Stephenson and was used to transport the ironstone to Whitby and then on to Wearside and Tyneside.

The railway was upgraded in the 1840s to accommodate steam trains which further aided the transportation of ironstone.

An industrial heritage project was first mooted in the late 1990s, although the latest plans have been drawn up over the past six months.

The exact details of the scheme, which has a working title of This Exploited Land, have yet to be finalised, but it is hoped it will increase conservation and provide training for local communities.

Public drop-in sessions are being organised, the first of which will be at Rosedale Reading Room on March 19 from 5pm to 8pm.

Other events will be held in Grosmont, Lealholm, Ingleby Greenhow, Goathland and Danby throughout March and April.

The project has been unveiled as the North York Moors National Park is faced with potential mining schemes to exploit its natural reserves in the 21st century.

The biggest proposed development would see a potash mine created which could employ up to 5,000 people.

Three separate gas projects are also being considered for Thornton-le-Dale, Westerdale and Hackness.

It’s a busy evening in the dale, but like waiting for a bus.

Mobile Library will be in the village centre

Then The RBF from 7.30 meeting at the coach house with presentations from the NYMNO and the New Pilot Scheme for Roseale Business.

It was through running my own courses here at the Orange Tree that I came to be in this beautiful part of North Yorkshire. and gradually i have come to realise that Rosedale is a very special place in which to practice yoga and meditation. It is also my home and the roots of what was called Kalagiya yoga are now firmly planted and grounded here at the Orange Tree in Rosedale .

And so it seems fitting now to give the yoga school a name which celebrates the place in which it is situated, surrounded by the wonders of nature and the peace and tranquility of this secluded dale. Yoga and meditation is something that has benefitted me greatly in my life, so it is my pleasure to pass on some of the practices that are all about progressively relaxing on every level! so “Rosedale School of Yoga & Meditation” it is!

For more news have a look at the New Orange Tree Web site. 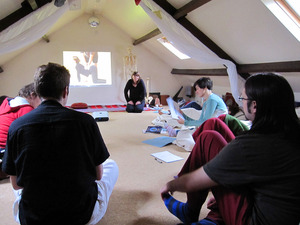