Archive for the ‘Chimney Bank’ Category

The work on the line and kilns has continued apace since the last update. Work to stabilise and add some weather resistance to the Bank Top kilns is now completed.

Sean Doughty and his team have also completed the restoration of the line through what was a swamp by Indian Steps by dumping heather bales and re-laying the track on top – an excellent job as you can see:

The William Birch contractor team are busy on stabilising the southern buttresses of the Iron Kilns by removing vegetation growing in the stone and brick work and then repointing to weather proof the structures:

There is now considerable concern over parts of the Stone Kilns where there has been a major stone fall at bay no 10. Engineers and members of the project team have recently inspected the damage and plans are being made for remedial action to be taken soon.

Work has started today, Monday 13 May, on conserving and stabilising the ironstone roasting kilns at Bank Top, Rosedale. Initially, the area around the kilns will be fenced off and scaffolding erected to allow William Birch Ltd to carry out much needed conservation work on these impressive monuments to Rosedale’s ironstone ‘Klondike’ which started here at West Mines in 1856.

A lot of work has been done under the project on the ironstone workings and railway line at East Mines (see previous LoI updates) so it is good to see that West Mines, also known as Low Works, are now getting the same treatment.

Access to the lower car park at Bank Top will be restricted during the period of works so visitors are encouraged to use the upper car park.

A a result of a severe accident on the Bank on Wednesday (see below), the road is closed from the upper car park at Bank Top and by the White Horse Inn at the bottom until further notice. 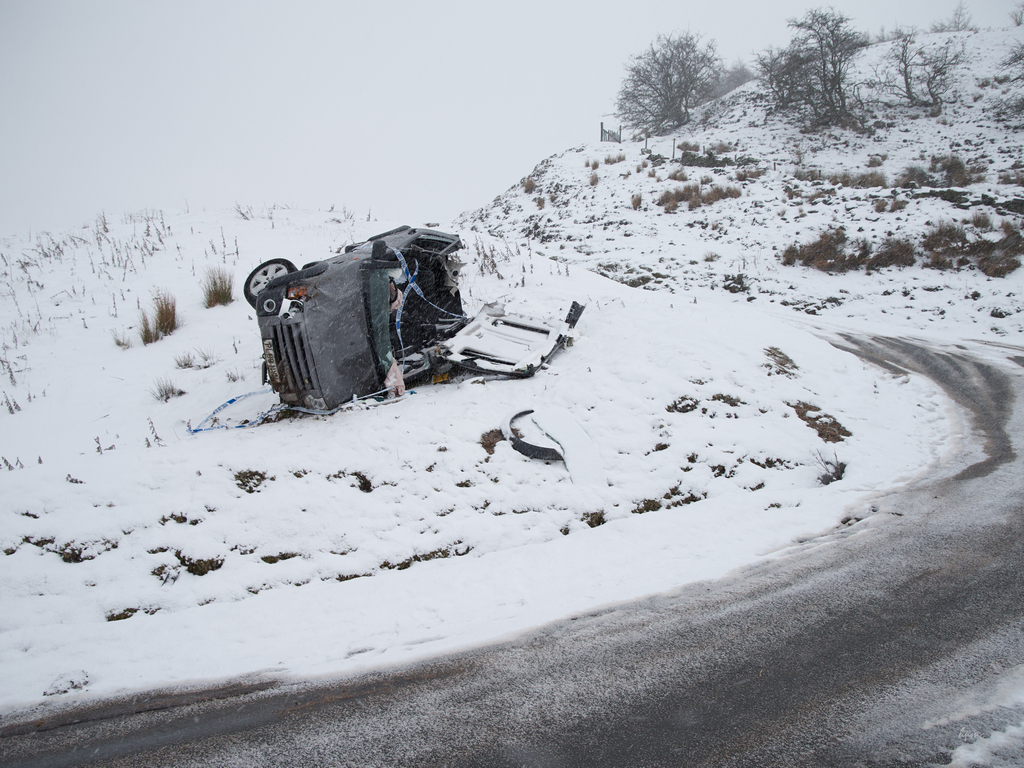 Look out the windows, read the signs and ignore the satnav.

A six axle HGV on its way to Updale on 13 February, having come down Chimney Bank and discovering that there was no way through the narrow High Bridge at Bridgefoot. 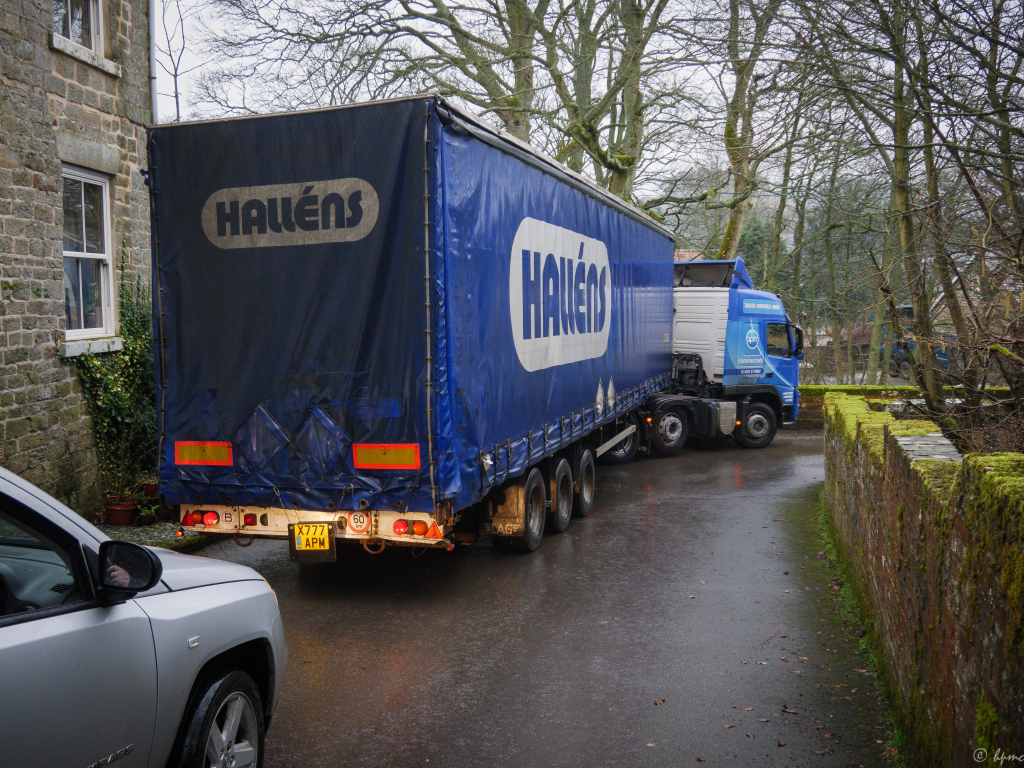 As usual, satnav was the excuse for the driver not reading the warning signs at the Spaunton Moor road junction and again at Bank Top. The result was he had to reverse all the way back up to the Lookout and then drive up Chimney Bank!

… or the perils of not reading the danger signs and not using common sense when the Bank is covered with ice and snow. There were two accidents today, the first occurring overnight and then another this morning which resulted in the Yorkshire Air Ambulance being called out, along with the Fire and Rescue Service and the normal ambulance. 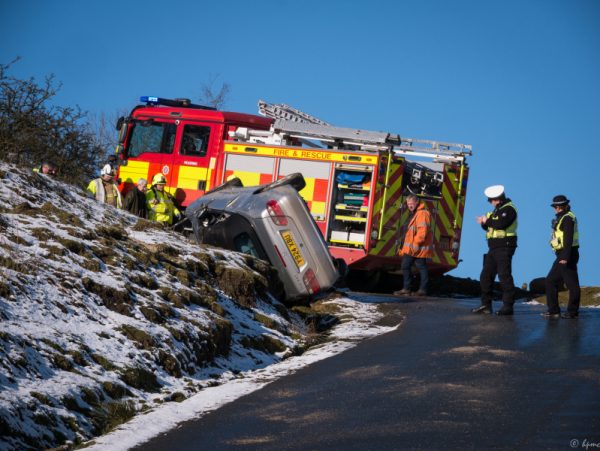 Fortunately, only walking wounded this morning. 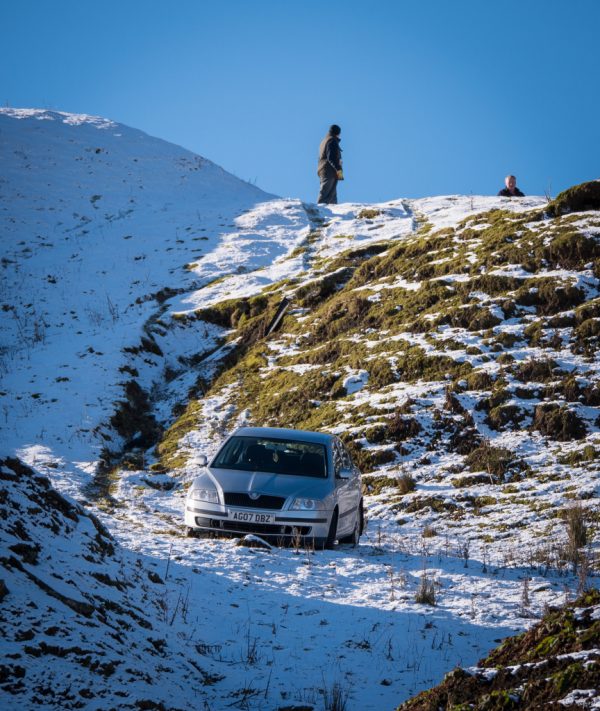 Parked on the hill overnight – dented pride only

Remember, stay away from Chimney Bank in wintry conditions, no matter how well you think you know the hill, if you want to avoid being the fifth incident so far this winter. No-one seriously hurt this time, but please support the Yorkshire Air Ambulance – you never know, you might need it sometime! 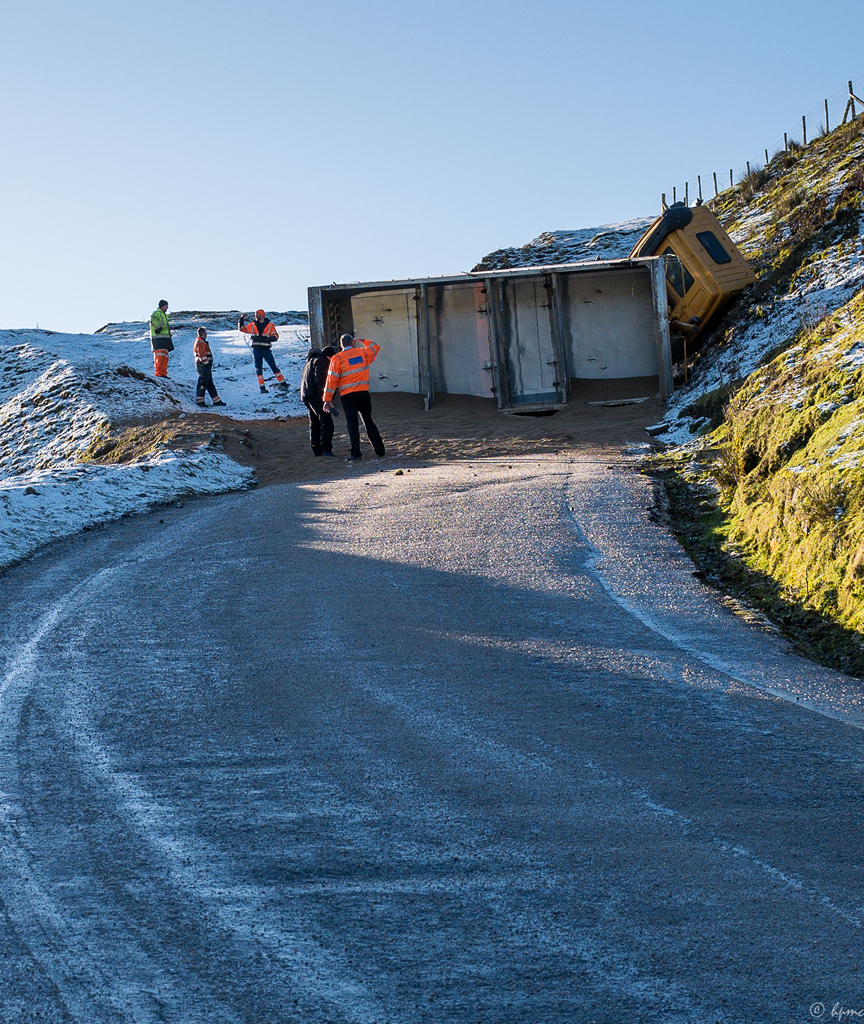 A Star In Rosedale

Tony Robinson, of Blackadder and Time Team fame, and a film crew were in Rosedale on Monday 5 September, shooting for a series on walks across the UK to be shown later this year on Channel 5. Linda Chambers from the Rosedale History Society was asked to advise Tony of the history of ironstone mining in the dale. 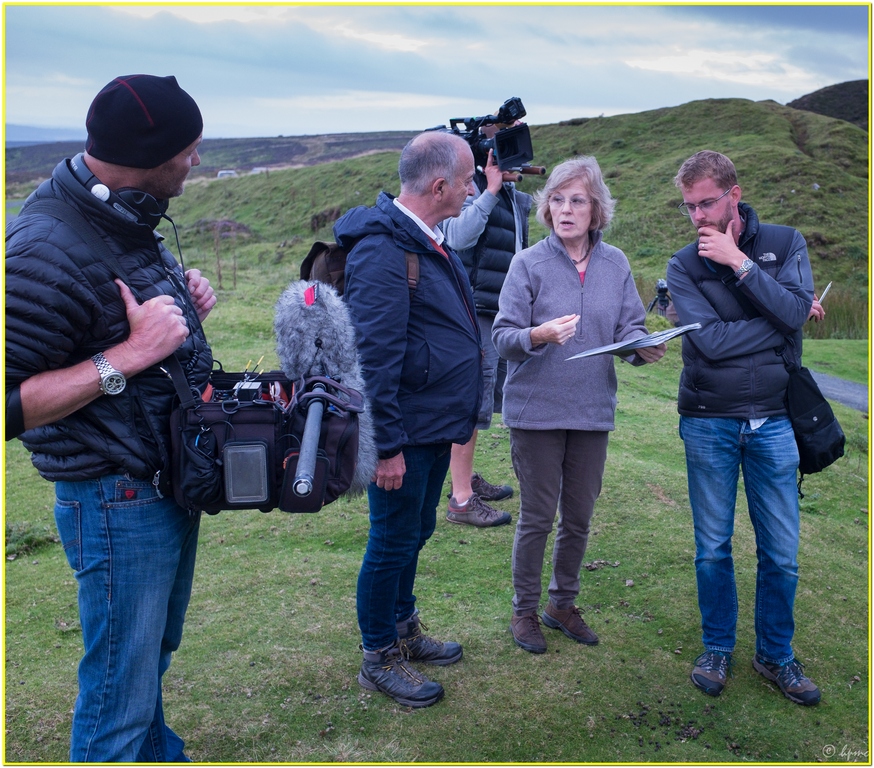 Briefing Tony on the history of mining at Bank Top

The production company will be contacting the History Society once the broadcast dates are known, so keep in touch with the blog and the Community Forum for further details.

A beautiful new bench for the use of weary hikers was placed over the weekend at the Lookout area at the foot of Chimney Bank in memory of Brian Jeminson, from a longstanding Rosedale family.

The bench was donated by his son, Mark Jeminson, and daughter Bridget Read. Brian Jeminson was also the brother of Carol Cockerill of Depot Cottage, Rosedale East.

The Heritage Lottery Fund has awarded a £3m grant to protect and raise awareness of one of the unique landscapes of the North York Moors National Park.

The main focus of the project will be the importance of the pioneering ironstone and railway heritage of Grosmont and Rosedale which is being eroded by time.

The project – named ‘This Exploited Land, the trailblazing story of ironstone and railways in the North York Moors’ – will also encourage rare wildlife, wild daffodils, ancient woodlands and the special species of the River Esk.

Linda Chambers, a member of the executive group for the ‘This Exploited Land’ project and secretary of the Rosedale History Society, said: “This is wonderful news for all those who live in Rosedale and the Esk Valley, linked as we are by our industrial heritage.  We hope that our communities will continue to support the project over the coming years – this is a great opportunity not only to help maintain our nationally important sites but also to tell our story to the wider world.”

National Park Authority Fundraising Officer Stephen Croft said: “Key parts of this story have never been told before. We want to capture the public imagination with the story of the forgotten communities, the pioneering ironstone exploitation and the early development of railways along the remote valleys of the North York Moors.”

The ironworks at Grosmont retain rare surviving elements of world-leading innovation in blast-furnace technology forged in the region on Teesside. This contributed to innovative bridge design across the world and eventually to the creation of Sydney’s famous Harbour Bridge.

At the height of its production between 1873 and 1914, about 19 per cent of the world’s demand for iron came from the Cleveland Hills and the North York Moors.

The project will reveal the impact the sudden explosion of industrialisation had on the landscape, its national and international significance and conserve, protect and record the fragile remains of this revolutionary age.

Stephen Croft continued: “We want the landscape to become recognised for its economic and technical influence which extended worldwide. This will satisfy a hunger for recognition in local communities and support the tourism economy. Special links will be made with Teesside which itself has suffered industrial decline.”

The story includes the achievements of railway pioneer George Stephenson who designed the Whitby to Pickering Railway in the early 1830s.  Much of it is still being used today by the North York Moors Railway Trust.

HLF’s Landscape Partnership (LP) programme – which has now been running for a decade – is the most significant grant scheme available for landscape-scale projects.  To date, over £160m has been invested in 91 different areas across the UK helping forge new partnerships between public and community bodies and ensuring people are better equipped to understand and tackle the needs of their local landscapes.

The Authority and its community partners were one of three successful Yorkshire bids for funding. The HLF also awarded grants to the rare, internationally-important wetland at Humberhead Levels in North Lincolnshire and East and South Yorkshire (£1.9m), and to the Ingleborough Dales (£2.1m) for a limestone landscape in the Craven district of the Yorkshire Dales National Park.

“As a passionate advocate of landscape-scale conservation through habitat recreation and restoration, I am delighted to see HLF’s continuing, visionary support for nine more Landscape Partnerships throughout the UK, for the benefits of people, landscapes and wildlife.  And as an adopted Yorkshireman, I cannot help noticing, with considerable pride, that three of them are in the iconic landscapes of God’s own county!”
Fiona Spiers, Head of the Heritage Lottery Fund for Yorkshire and the Humber, said:
“This funding has helped forge strong local partnerships which have secured the future of some of our most threatened landscapes. These schemes all demonstrate a need for urgent conservation work to the natural and built heritage as well as reconnecting rural communities to these places.  They are important on many levels, including being an integral part of our health and well-being and a significant contributor to the tourist economy. Yorkshire’s amazing countryside is under ever-increasing pressure and we must act now to make sure it continues to be one of our greatest assets.”

The Rosedale History Society presents an illustrated talk entitled “Rosedale Hill Climbs – Endeavour and Crowds 100 Years Ago” on the subject of the then nationally famous Rosedale Chimney Bank hill climbs, to be given by Paul Hayward, a local motor historian, in the History Room at the White Horse Farm Inn on Friday 26 April 2013 at 8.00 pm.