Archive for the ‘This Exploited Land’ Category

Natural England have announced the temporary removal of open access to the old railway line from Reeking Gill around Dale Head to Blakey Junction from 8 July to 30 September to allow essential work to be done restore the path as part of the Land of Iron project- see the flyer for details:

Signage has been put by NYMNP at 16 access points to the line around the dale.

As part of the Land of Iron Project, The National Park is running a series of wildlife events in and around Rosedale. The programme dates, times and locations are shown in an earlier post and there is time to book in to more of these fascinating events which reveal the rich diversity of nature within the dale – and by attending any of them there is the opportunity to win a 4kg/9lb chocolate egg! (see below).

In summary, the week was a great success with most of the varied events being well attended. A huge range of animal and plant species were spotted and studied, of which some of the many highlights were spotting the rare Arctic Starflower in Hartoft, the rarer Tachina Grossa, a fly with attitude, along with bird wing moths as well as hearing (with the aid of bat detectors) and then watching Daubenton’s bats hunting by night along the River Seven at Dunn Car bridge.

Huge thanks to Elspeth ingleby and Sam Newton from the National Park for organising a truly fascinating, entertaining and instructive week – more please next year!

As reported previously, work continues to stabilise the ironstone roasting kilns at Bank Top. The contractors are currently strengthening and re-inforcing the back wall to prevent further stone falls and are also re-pointing the interior of the arches top and bottom to stop water ingress.

The work is progressing well, although no completion date is yet known for the work as more problems become evident in the structure. Further updates will be posted here soon.

A public consultation on the proposed conservation measures on Rosedale’s ironstone roasting kilns was held last night, 12 December, in the Coach House Inn. The session was very well attended by 28 local people and there was lively discussion on several topics after stimulating presentations by representatives from the project office and the archaeological and engineering agencies involved with the proposed works.

Details of how to volunteer to help out in the programme of works on the line in 2018 can be found at www.northyorkmoors.org.uk/landofiron

A group of local volunteers, armed with buckets and spades on Saturday 28 October, dug down through the mud and discovered the original upstream entrance to the Reeking Gill culvert, with Shaun Doughty having used a digger to clear the site (see previous update on 4 October). Work will now continue to shift the rest of the debris from the entrance and expose more of the large stone archway. Muscle power and determination won the day and well done to all. 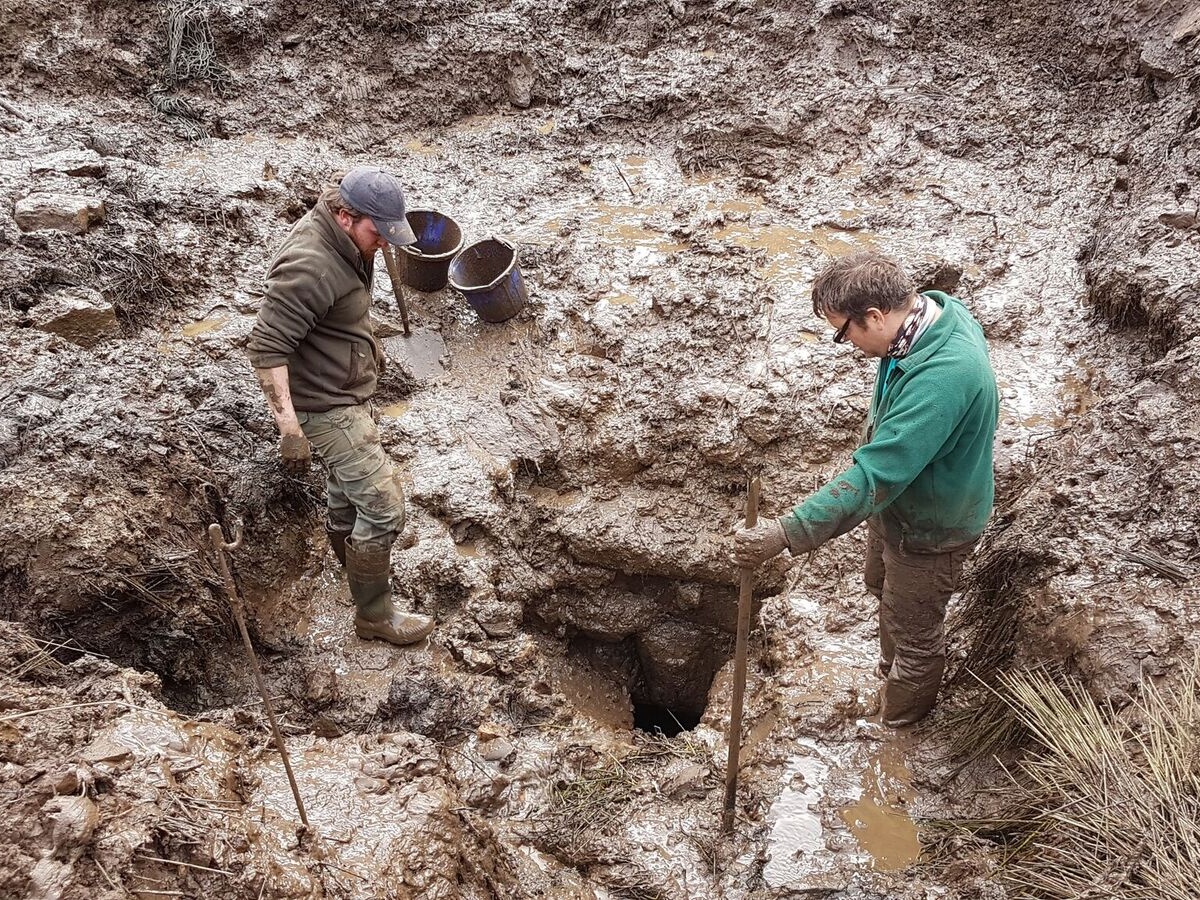 The entrance exposed at last!

Work has also been done to clear some of the smaller culverts along the old railway line so that water no longer builds up and threatens the integrity of the track bed. 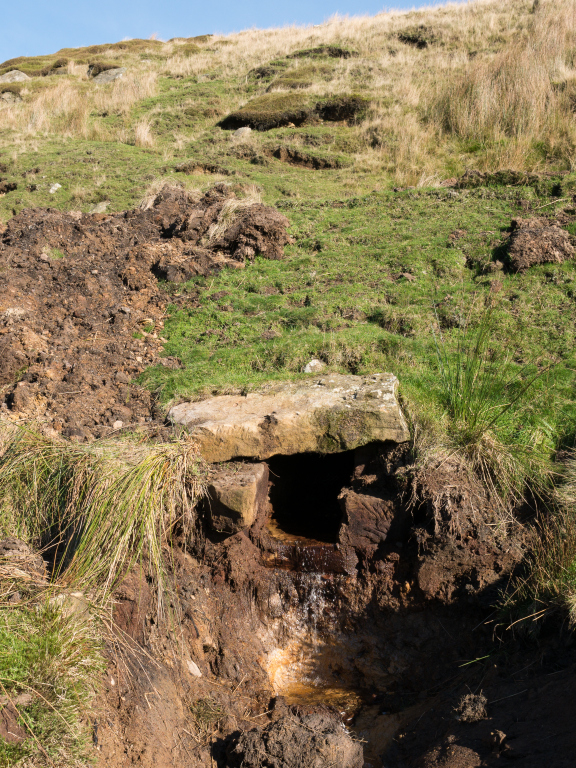 A cleared culvert near Nab Scar

A fuller progress report will be given around the New Year, so that all can see how this marvellous project is progressing. Meanwhile please look at the NYMNPA call for volunteers poster and join in.

The repair to the trackway at the stone kilns at East Mines is maturing nicely with the grass that was seeded in the sandbags now sprouting well. 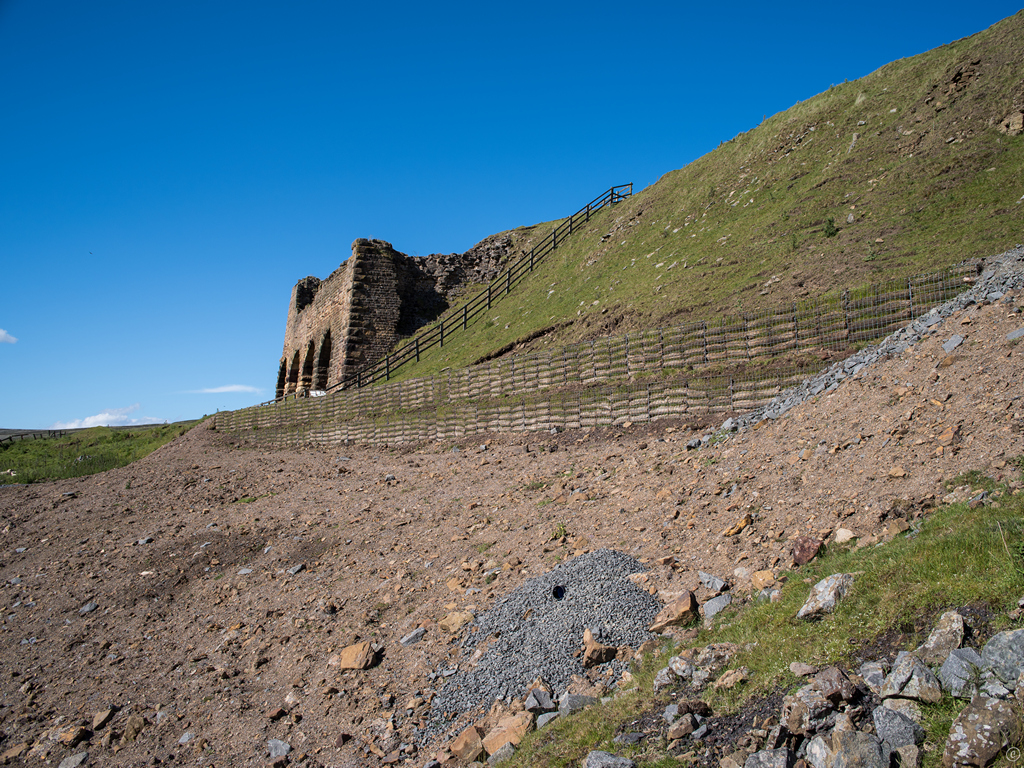 Grass sprouting from the sandbags in the gabions