Despite the atrociously wet weather some wildlife are managing to get on with things.  This mistle thrush is sitting on eggs way up in that tree.  Often a rather untidy looking nest with bits of all sorts she’s got some sheep’s wool loosely tucked in there.  Updale Natural History Recorder

To watch a female nuthatch preparing a nest hole is amazing.  She selects an old hole, often an old woodpecker nest hole as in this case and she transforms it.  She infills crevices and/or reduces the size of the cavity using mud and bits of rotten wood.  She will also use mud to reduce the size of the entrance to minimise the risk of predation.  The male, distinguished by chestnut red flanks, keeps guard during this process and will fend off any intruders.  Updale Natural History Recorder 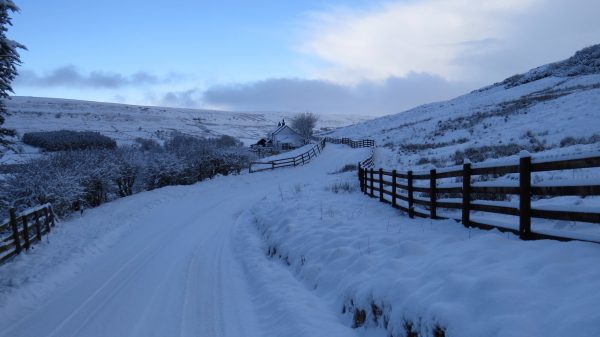 Tawny owls are very vocal in late autumn and throughout winter but we don’t often get to see them in all their splender. How lucky local residents Bob and Janet Morton were to have a tawny owl in their garden recently, on two separate occasions. Bob has captured the warm chestnut brown feathering, distinct facial disc and somewhat dumpy appearance beautifully.  Very many thanks Updale Natural History Recorder

To see five brown hares together recently on a morning which brought a hard frost was a real treat.  Who knows boxing might start soon! Updale Natural History Recorder

Fantastic to see these secretive and increasingly rare birds here in Rosedale.  At least five hawfinches are in and around the churchyard feeding on yew berries.  The hawfinch is the largest of our finches with a top-heavy look due to a large bill and thick neck.  With this powerful bill the hawfinch is able to crack open cherry stones.  They also feed on seeds from hornbeam and yew.  Autumn 2017 saw an unusually large influx in to the UK as a result of a crop failure in Europe and there have been a number of sightings in North Yorkshire.  But how lucky we are to get some in Rosedale and it certainly could be a first record for some time.  With great appreciation to Craig and Helen at Abbey Stores for the tip-off  and the best view of these shy birds.  Updale Natural History Recorder Bounty of berries for Redwings

The yews and holly in our churchyard are full of berries and redwings are taking full advantage during the cold weather. Redwings are a winter migrant and arrive here during October and November. They are the smallest of the UK true thrushes and are identified by the distinctive cream stripe above the eye and an orange-red flank patch. Easily disturbed but a little patience and they can be seen plucking and eating the red yew berries. Updale Natural History Recorder

The redwing is smaller than the song thrush

Look out for woodcock

Sad to see a roadkill woodcock on an early morning walk but a chance to study the extraordinary plumage of this beautiful wader. Woodcocks breed here in Rosedale but during Autumn and Winter numbers are bolstered by an influx from abroad. The woodcock is similar to the snipe with a very long bill but it is slightly larger and russet-brown with short legs and a barred crown. Woodcock live in marshland and damp wooded areas and can sometimes flush from ditches. They are perfectly camouflaged in leaf litter with their mottled feathers and often go undetected. Woodcocks are nocturnal, spending the day resting up and at night feeding in the open, mainly on worms. To see and hear a male woodcock’s display flight called roding in Spring is another of nature’s delights Updale Natural History Recorder Perfectly mottled feathers of woodcock’s back

In Rosedale we have a healthy population of both Barn owls and Tawny owls and we get occasional glimpses of Short-eared owls over the moor but when a Long-eared owl decided to make our dale its winter roost in 2015/16 it was a very special time. It was observed for over two months on a regular basis hunting in rough pasture with plenty of gorse thickets and a thick hawthorn hedge making for a good roost site.

The Long-eared owl was first noticed on 23 November 2015 at 3.30pm when it was quartering the rough pasture at the same time as a Barn owl and a Kestrel. Immediately it was clear there was a noticeable difference between the two owls, one being darker than the other but light conditions were not good. It was a few day later when it was confirmed that the darker owl was indeed a Long-eared owl; the orange eyes and ear tufts unmistakable.

It became a routine, each afternoon a walk out to see if it would make an appearance and it didn’t disappoint. On average every couple of days the Long-eared owl was seen quartering the rough pasture from mid – late afternoon as the light began to fade, settling at times on the ground, on a fence post or branch of gorse or low down in a hawthorn tree. It would make spectacular flights, low to the ground, back and forth, coming close to the fence. Occasionally it would hover only briefly but beautiful to watch. It was not always obvious to see. At times a good scan of the ground and thickets with binoculars would locate it just sitting there perfectly camouflaged content to watch the world go by. On one occasion in late December the weather was poor with light intermittent rain and the Long-eared owl lifted from the fence flying towards the edge of the gorse thickets where it tucked itself close in on the ground. It remained there visible for over an hour. Meanwhile, a Barn owl continued to quarter the pasture and a Kestrel appeared. The Long-eared owl watched on as the Barn owl dropped on a vole and lifted off with its quarry. The Kestrel swooped in to steal the Barn owl’s prey, attacking mid-air. Both locked talons and went to ground. A tussle and it was over, the Kestrel flew off triumphant, the Barn owl robbed of its meal only to have to start again. And the Long-eared owl – it just continued to look on about 30m away.

Many times the Long-eared owl was observed dropping to the ground, folding its wings at the last minute to catch prey but only once was it seen with actual prey. On taking its quarry, likely as not a vole, it took a short flight and dropped to the ground. It opened its wings and hunched over, mantling its prey before swallowing it whole. It made another short flight to a well used bow perch on the edge of the gorse and preened itself, full and content.

On 14 January 2016 it was an absolute delight to see the Long-eared owl quartering the rough pasture at 7.35am. It was flying low and dropping regularly to the ground into a fair covering of snow. This was the first sighting of it at dawn.

On a bright and sunny afternoon in January with the ground covered in snow there was a Kestrel, two Magpies and a Barn owl at the far end of the rough pasture but the Long-eared owl was nowhere to be seen. Just as all hope of seeing it was fading it appeared straight out of the hawthorn hedge. It came out at speed like a bullet and straight in to hunting. Talk about making an entrance.

Alas, it couldn’t last for ever. On 31 January 2016 it appeared at 3.20pm quartering the rough pasture in light rain. It landed a few times as it worked its way along the pasture and beyond. It was gone and this was to be the last sighting.

A few days later it was clear the Long-eared owl had left the area and a search around the bow perch revealed four pellets. Pellets regurgitated by Long-eared owls are light grey and slightly smaller than those of Barn owls. Analysis of the four pellets by Derek Capes of Great Ayton revealed skeletons of seven Field voles and one Wood mouse.

The Long-eared owl is our only true nocturnal owl.

Long-eared owls don’t have long ears. The long feather tufts on the top of the head just look like ear tufts. Ears of owls are where you would expect, at each side of their facial disc.

In winter there is an influx of Long-eared owls in to the UK from the Continent and they roost communally favouring hawthorn and scrubland. Long-eared owls do breed in the UK but numbers are limited.

Long-eared owls are associated with coniferous woodland and scrub habitats during the breeding season and adopt old stick nests like those of crows. They establish breeding territories in February ready to start breeding in March and April. Perhaps it was time this Long-eared owl left to start its journey home to breed. Updale Natural History Recorder